Studies about dogs and cat amputees are rare, but the Tripawds Nation is working hard to change that: last November, 250 Tripawd dog pawrents and 23 Tripawd cat pawrents helped us launch the first Tripawd Pawrent Experience and Satisfaction Survey. 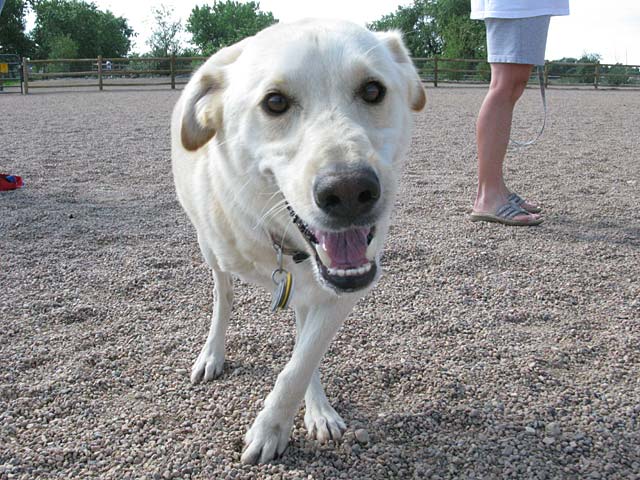 This landmark study about life on three legs is an exact replication of a 1999 survey* conducted by Dutch veterinarians.

As one of the few veterinary medicine studies conducted specifically about canine amputees, this study only sampled 40 dog parents and did not analyze how felines adapted to living as amputees. We however, included cats in this survey.

We replicated the questions asked by the Dutch veterinarians, and as a result we now have the most recent and largest study results (that we know of) about how cats, dogs and their humans adapt after amputation surgery. 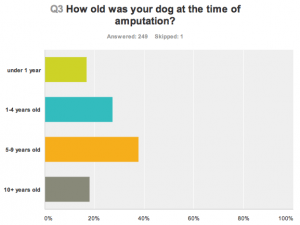 Although we are not veterinarians or even professional statisticians, we believe this survey is a good indicator of what pet parents can expect after deciding to proceed with amputation.

The anonymous answers provided by survey respondents are an accurate reflection of the general experiences we’ve encountered within the Tripawds community since our founding in 2006.

“She is not as capable as before, (tires more easily and finds it hard to walk and stand although she is fine running) BUT I don’t think she cares one bit about having 3 legs. Our vet said it is more traumatic for the owners than the dogs and I think he was right.”

“ONE of my many fears about this whole amputation…”how could a large, overweight, somewhat older dog possibly be ale to walk on three legs?” Nooo problem whatsoever!! It was as though she never needed a fourth leg to begin with.” 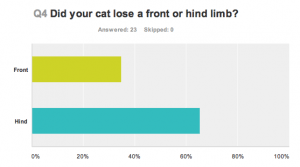 However, some surprises we encountered in these survey answers included:

“He was a once feral cat. He was afraid of strangers and hid as soon as he heard someone coming. Now, he is more social. He’s more loving. It’s almost like he knew we were only trying to help him.”

“We held on to her leg by pinning it twice. I thought amputation was the worst solution in the end it turned out to be the best. After the amputation it w as like a cloud had dissapeared from her life. It’s clear the leg had been causing her paint and holding her back. She was like a puppy. I wish I had known than what I know now.”

“Knowing what I know now I would have acted with more urgency. To know that our dog was in pain for two months before we had a diagnoses kills me.” 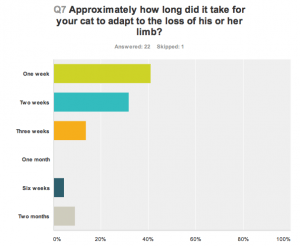 “I’ve thought about that a lot lately. I don’t think I would do it again. I’m happy that we had her for an extra year but I feel so bad when there is another dog around and she can’t go out and play like they can. I don’t think she’s in pain but I think her personality has changed so much. She’s a beautiful Australian Shepherd and loved to roam around the property but now she just lays on the porch. So far, she hasn’t showed any signs of the cancer coming back and the vet gave her 10 months to a year and she’s already gone beyond that point. Maybe, we did the right thing but if given the choice I wouldn’t do it again.”

“Would not do amputation on large dog for cancer again. My dog only had two months post surgery and chemo before the cancer metatasized to his lungs. He was in horrible pain from muscle spasms after the surgery. His quality of life was lost with the leg. It was heart breaking to hear him crying out in pain for weeks after the surgery. I would be fine with amputation for injury, trauma.”

Our non-scientific theory for this difference of opinions between cat and dog parents is that many of our canine members joined us because they had an aggressive terminal cancer like osteosarcoma. Unfortunately for some, the cancer returned with a vengeance immediately after amputation surgery and their dog did not get as much post-op time as anyone would have liked. 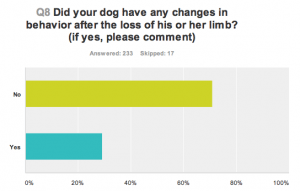 The felines who join Tripawds because of cancer typically have a non-terminal form of cancer such as a Vaccine Associated Sarcoma (VAS) that’s immediately resolved with limb amputation. We do, however have two feline Tripawd members who lost a leg to osteosarcoma, an extremely rare condition in cats.

“I had to give him a chance at life. He did fine and even though the cancer spread to lymph system a year later and we had to let him go, he was a happy, loving boy for that year. We even adopted another tripod after he passed.”

One theme that we consistently encounter within our community was also reflected in the written survey responses: the more upbeat a parent remains during recovery, the better the overall experience for everyone involved – even later if the Tripawd didn’t live up to the general prognosis for their condition. 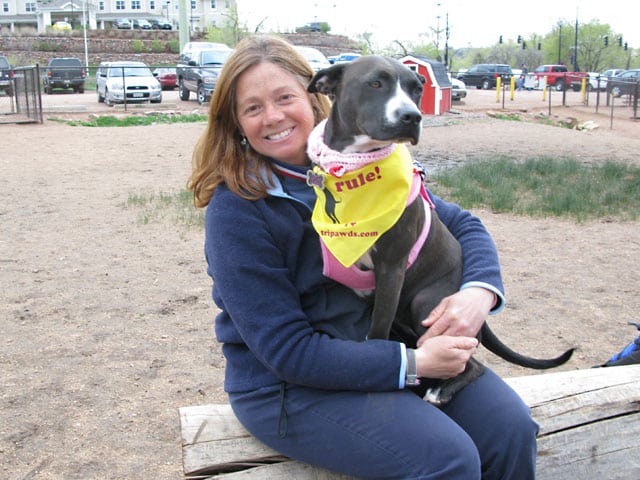 “She was definitely not ready to go, before the operation; that’s why we changed and gave her the amputation. She did not get to live very long: we had been on the alert for the possibility of her front leg osteosarcoma getting into her lungs, which we had been warned was a real possibility, but it got into the tail end of her spine. There really were only a few of good weeks between recovery and the need to call; thank goodness the vet is near and was able to come to our house. But those weeks were worth it, clearly for Karina and equally for us.”

“I learned to let go of my fixation with “time” and replace it with focus on QUALITY and living in the moment, living in the now! We let NOTHING rob us of our sacred treasured time together. This journey isn’t “just about an amputation,” it is chock full of lessons for the soul that no other experience could possibly give us…..and no other teacher could possibly teach us other than our dogs.”

Any statistically-inclined readers who want to work more closely with the survey to uncover trends we may have missed, are welcome to do so by contacting us for Excel worksheets of the survey data.

Thank you so much to everyone who participated in the Tripawds Quality of Life study. It’s through your participation and the generosity of all Tripawds Supporters that we can afford to conduct surveys like this and continue enhancing quality of life for all three-legged cats and dogs around the world.

*The original Dutch survey is: Adaptation of dogs to the amputation of a limb and their owners’ satisfaction with the procedure; J. KIRPENSTEIJN, R. VAN DEN Bos, N. ENDENBURG. The Veterinary Record, January 30, 1999.

**A quality of life study specifically about feline amputees was conducted by the organization International Cat Care, however the date of the survey is not revealed on their website.

3 thoughts on “Tripawds Quality of Life Survey Tells All”